Ampere has tested a set of 130+ images verified to run on the Dpsv5 platform through daily regressions. These are common software packages found in many Cloud-Native stacks that show the maturity of the ecosystem on the Dpsv5 instances.

NGINX on Azure VMs based on Ampere
NGINX is a high-performance HTTP web server that is widely used for cloud web applications. As a web server, the performance of NGINX depends on compute, memory, and network performance making it a great test subject for the overall performance of our processors.

NGINX is a high-performance HTTP web server that is widely used for cloud web applications. As a web server, the performance of NGINX depends on compute, memory, and network performance. This makes it a great test subject for the overall performance of our processors.

While benchmark testing in our labs, we configured NGINX to serve a static HTML file over HTTPS. The workload generator was configured to run under increasing load from multiple clients, with a strict SLA. In our tests, we found that NGINX performance on Ampere Altra Max was up to 3.2 times faster than equivalent Intel Xeon Icelake 8380 and 1.83 times faster than AMD EPYC Milan 7763 at a socket level. 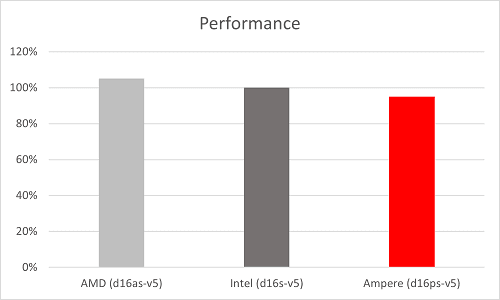 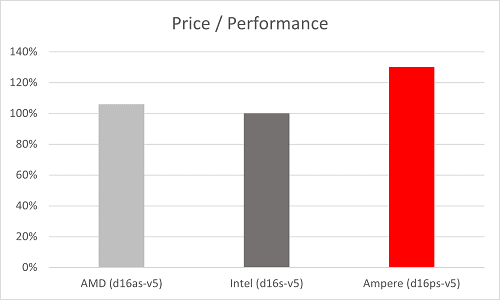 In the past decade, we have seen the power consumption of cloud service providers explode, with Bloomberg estimating in 2020 that cloud computing consumed 1% of the world’s electricity and predicting that this would rise to 8% of the world’s energy consumption by the end of the decade.

In our testing of NGINX, we found that Ampere Altra Max processors used up to 73% less power at comparable performance to x86 platforms. Up to 69% fewer Ampere Altra Max processors were required to deliver 1 million requests per second. For cloud application developers, choosing Ampere instances means reducing the amount of compute resources, and reducing the total power required to deliver similar performance. You can reduce the carbon footprint of your cloud applications, while maintaining high performance at a much lower cost.

x264 on Azure VMs based on Ampere
The x.264 library, which implements the H.264/MPEG-4 AVC standard is very widely used today in a variety of video streaming services, runs extremely well on Ampere processors at scale.

Video encoding is a critical cloud technology used to compress videos to reduce network & storage requirements. To evaluate video encoding performance, we use libx264 which implements the H.264/MPEG-4 AVC standard, the most widely used today.

To evaluate x264 performance on Azure VMs with Ampere Altra, we ran “vbench: a Benchmark for Video Transcoding in the Cloud” on 16 vCPU VMs on Microsoft Azure, encoding the 15 input videos on each vCPU and measure performance throughput. Ampere Altra CPU based VMs running in Microsoft Azure have an average price-performance advantage of 130% and 115% vs. legacy x86 processors. 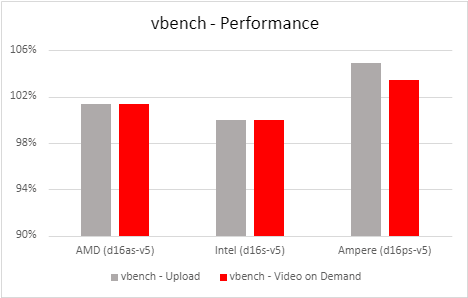 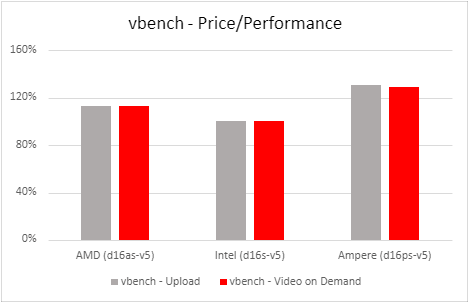 Redis on Azure VMs based on Ampere
Redis is an open source, in-memory, key-value data store that is typically used as a database or a cache. As a scalable cloud-native service, Redis runs extremely well on Ampere Altra and Altra Max processors.

In-memory cache such as Redis are at the core of many cloud-native applications. Redis is an open source, in-memory, key-value data store that is typically used as a database or a cache. It uses an in-memory dataset, but data can be persisted through periodic writes or appends to the disk. Redis is very fast, and it can deliver high throughput at sub-millisecond latencies. It is a feature-rich, modern, mature caching solution for todays cloud. According to DB engines, it ranks highly in popularity among key value stores in the cloud. 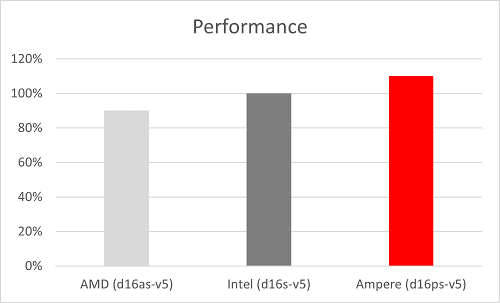 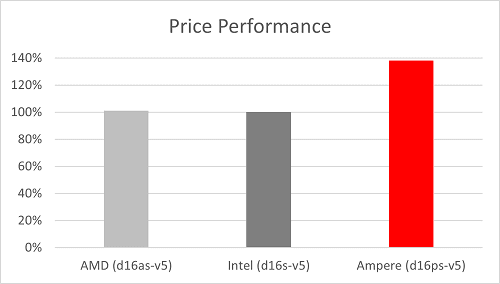 AI on Azure VMs based on Ampere
ResNet-50 v1.5 performance

MLPerf™ Inference is a benchmark suite consisting of carefully selected AI architectures that represent the cutting edge of today’s artificial intelligence. Therefore, it allows for a comprehensive test of how well a given system performs on a variety of machine learning tasks, including natural language processing, computer vision, recommendation engines, and more. It is a consensus on the best benchmarking techniques, forged by experts in architecture, systems and machine learning.

Ampere Altra VMs offer great performance in assortment of AI workloads, including the ones in MLPerf Inference benchmark. ResNet-50 v1.5 is a popular neural network architecture primarily used in the field of computer vision. This model, trained to perform well on ImageNet class prediction task, is part of the MLPerf Inference suite. 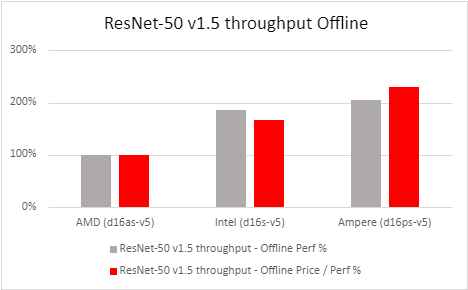 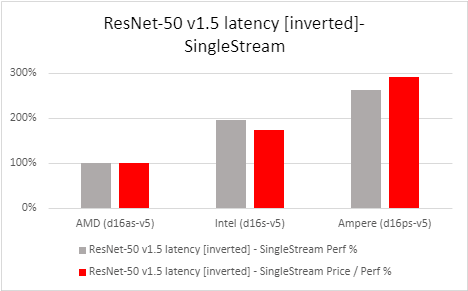 Ampere partners with the best system providers worldwide to deliver differentiated infrastructure for cloud native computing. The virtual machines currently offered by Azure are detailed below.

The Dplsv5 virtual machine sizes offer one of the lowest price points of entry within the general-purpose Azure Virtual Machines portfolio. The VMs provide 2GiBs per vCPU and do not have any temporary storage. These VMs are engineered to provide a compelling value proposition for many general-purpose Linux workloads that do not require larger amounts of RAM per vCPU.

The new Epsv5 VM sizes can meet the requirements associated with memory-intensive Linux-based workloads including open-source databases, in-memory caching applications, gaming, and data analytics engines. The Epsv5 series virtual machines are based on the Ampere Altra 64-bit Multi-Core Arm-based processor operating at up to 3.0GHz frequency. With high memory-to-core ratio, the Epsv5 is great for relational database servers, medium to large caches, and in-memory analytics.

Microsoft and Azure are trademarks of the Microsoft group of companies.

Recently we wrote about the overwhelming leadership of the Ampere® Altra® family of Cloud Native Processors on popular cloud native workloads. In that blog, we highlighted how Ampere

Microsoft is announcing the general availability of the latest Azure Virtual Machines featuring the Ampere Altra Arm–based processor. The new virtual machines be...

Cloud-native applications are specifically designed to run in the modern data center environment and cover a wide range of capabilities. These are often containerized and packaged for easy deployment and then delivered via DockerHub or other image repositories.

Cloud Native Base Images are used to construct other, more complex and feature complete images for all manner of workload. The choice of base image is driven by the use model of the deployment or OS requirements of the software being deployed.

Databases are the backbone of cloud-native application deployments. There are many different types of databases designed to meet the growing needs of global-scale deployments. Cloud-native software utilizes technologies such as SQL, NoSQL, time-series, and everything in between.

Cloud-native infrastructure is the glue that makes hyperscale possible.

Developing software requires the right toolset, and that begins with one of many programming languages.